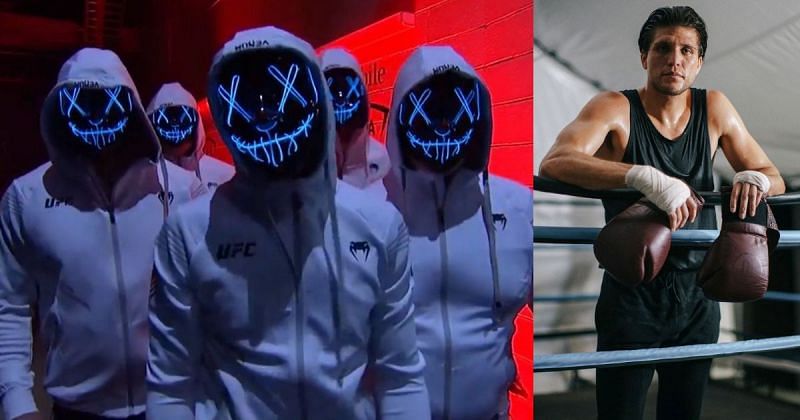 What was the significance of Brian Ortega’s mask and walkout at UFC 266?

Brian Ortega, ahead of his featherweight title fight against Alexander Volkanovski, stepped out in the Octagon in an extremely unique and slightly terrifying style. Sports masks from the anthology media franchise ‘The Purge’, Ortega came out in the most striking way.

The preparation for the fight saw things heat up between Brian Ortega and Alexander Volkanovski. It reached a point where Ortega said the title was the last thing on his mind and that he “would come for Volkanovsky’s lead”.

Ortega’s walkout fits his tale perfectly as he seeks to â€œpurgeâ€ Volkanovski and grab his featherweight girth. Ortega is hoping his performance against Alexander Volkanovski at UFC 266 matches the narrative he has put together for the fight.

Brian Ortega finds his way to the list of coolest walkouts

Brian Ortega’s purge-themed walkout certainly earned him a spot alongside Israel Adesanya and Conor McGregor. Adesanya wowed fans in 2019 when he took to dancing during his walkout before facing Robert Whittaker at UFC 243.

Accompanied by an entourage of three dancers, Israel Adesanya impressed the fans. His routine was inspired by the hugely popular manga Naruto.

Conor McGregor set the tone for future walkouts by marching to the Octagon accompanied by singer Sinead O’Connor, who performed “Foggy Dew” at UFC 189. It was the first time an artist had accompanied a athlete in UFC.

A featherweight championship game between Alexander Volkanovski and Brian Ortega will headline UFC 266 this weekend. The card also features another championship fight between Valentina Shevchenko and Lauren Murphy. Also on the card is a five round contest between Nick Diaz and Robbie Lawler.

Watch our exclusive interview with Dustin ‘The Diamond’ Poirier here!

COVID Delta surge is on the decline, but Hawaii experts warn of declining guard

This is the # 1 best face masks, according to the evidence