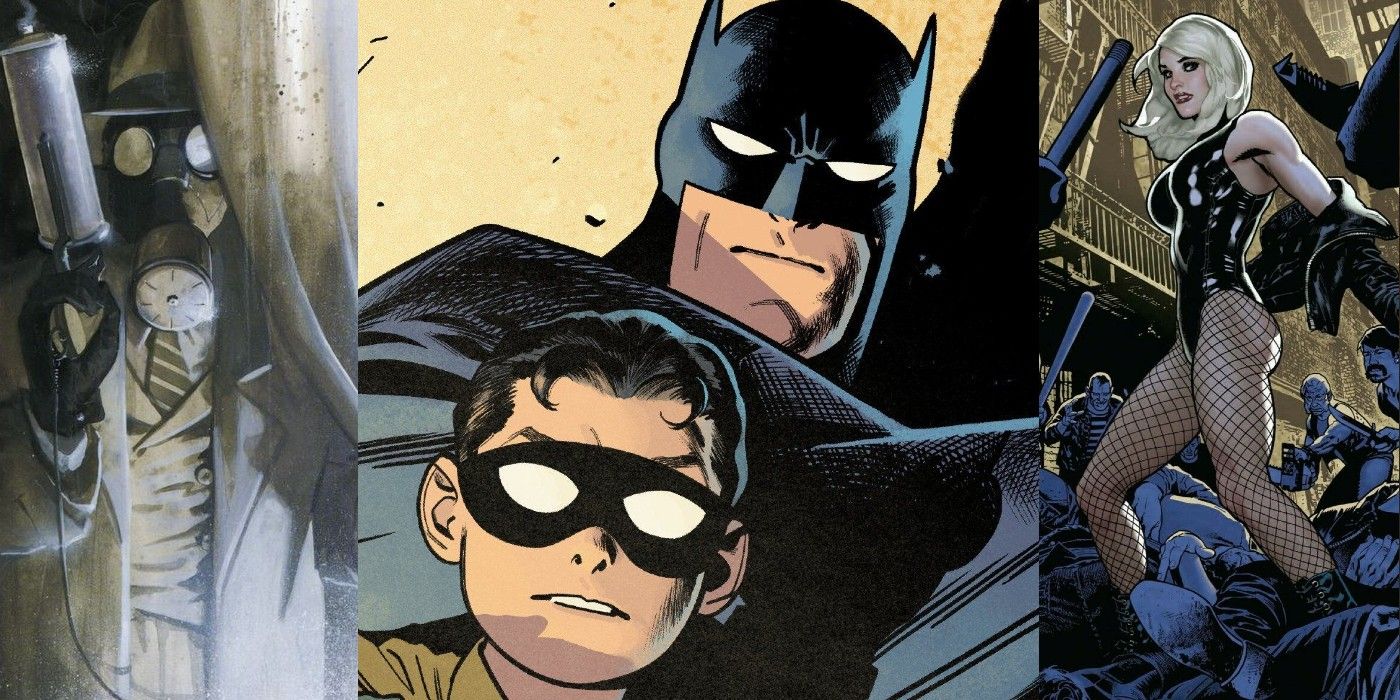 Ever since Superman burst onto the scene in 1938, comic books have proven the old adage “you can’t judge a book by its cover” wrong. The Man of Steel’s bright blue and red costume set the standard for superhero outfits, causing a stir in the public consciousness and making it clear that the heroes of the four-color page would always stand out.

And while many heroes have colorful costumes that match their incredible powers, the vigilantes and scoundrels who walk the streets of crime-ridden cities tend to do the opposite. Often dressed in dark hues that allow them to blend into the shadows, the street characters of the DC Universe have made their own fashion statements that pack a punch.

While Dick Grayson began his superhero career in bright reds and greens as Robin, when he grew up and became his own man, Nightwing took on a darker look. These days, Nightwing’s costume, a simple black bodysuit with an extra-large version of his blue emblem etched across the chest, allows the hero to hide in the shadows without being too creepy.

With most of his face visible to the public, Nightwing is more approachable than his mentor Batman ever was, and his costume is just flashy enough to recall his days as an acrobat in the circus. Few heroes are as sleek as Nightwing.

9 Sandman captures the fear of a dark time

When Wesley Dodds decided to fight crime as the Sandman, he decided to use a gas mask to cover his face. This served two purposes for the Golden Age vigilante. The mask protected Sandman from the sleeping gas he used to subdue criminals, but it also served as a reminder of the horrors of chemical warfare used in World War I.

In addition to his gas mask, Sandman wore a sharp three-piece suit, which allowed him to instantly blend in with the audience when he took off his mask. The purple cape he often wore helped Sandman serve as a bridge between the pulp heroes of the 1930s and the superheroes that followed.

8 Green Arrow lives up to its inspiration

As an expert archer looking to fight crime, Oliver Queen was inspired by the world’s most famous archer, Robin Hood. Dressed almost exactly like the beloved British folklore hero, Green Arrow wears an all-green costume with a hood and domino mask while sporting comics’ most famous goatee. The suit might be a little too on-brand given its name, but Green Arrow isn’t the kind of hero who likes to be subtle.

Green Arrow’s costume has undergone a number of changes over the years, including the loss of the bycocket, but anyone who lays eyes on the Emerald Archer will instantly know what it’s called. And when it comes to being an iconic hero, having a look that quickly gets your name on people’s lips is half the battle.

seven Black Canary is ready to fight crime or rock out

Although she debuted decades before the Ramones and Sex Pistols hit the scene, Black Canary’s look has a very punk rock vibe to it. Part blonde bombshell, part biker gang, Black Canary’s leather jacket over a bustier and fishnet stockings looks like something Blondie’s Debby Harry would have taken the stage in.

Over the years, Black Canary has used this look to both fight crime and lead a group, proving that her style can adapt to almost any setting. While not an ideal costume to wear in the winter, there’s no denying that Black Canary’s costume stands out.

Although his costume has gone through a number of iterations over the decades, Batman is instantly recognizable, thanks in part to the iconic silhouette his cowl helps create. Usually dressed in dark blue, gray, or black, the Dark Knight costume sets the standard for street heroes in not just the DC Universe, but all of comics.

Arguably, Batman has the best comic book costume, and he certainly has one of the most iconic. Part of what really sets the Caped Crusader apart is the bat symbol plastered across his chest, which often pops out from his fluttering cape. When Batman fights crime, he does it in style.

The 1990s saw the look of superheroes change drastically. The spandex look of the past gave way to a more militaristic style when comic book heroes got “real” and started using guns a lot more often. While the superhero style left the military feel behind, one ’90s hero who was able to stay true to his original design is Grifter.

A look that falls somewhere between Marvel’s Punisher and ’90s grunge fashion, Grifter wears his military-style costume – often with the body armor clearly visible – under a green coat. But what really sets this vigilante apart is his red and black bandana mask, reminiscent of the types of masks the James Gang may have worn while robbing trains in the 1800s.

4 The question makes everyone uncomfortable

Seeing a person’s face is an important part of feeling comfortable in a social setting. Even Batman, who covers most of his face, clearly has eyes, a nose, and a mouth, making it easier to see him as the person under the cowl. But with The Question, the blank face brings a sense of unease to anyone who encounters them.

Whether it’s Victor Sage or Renee Montoya under that empty white mask, anyone who encounters The Question has the same problem – you can’t tell what they’re thinking or feeling. Along with the mask, Question wears a business suit that allows them to blend in with the masses, making it look like anyone could be DC’s faceless detective.

3 Robin goes against the grain

Many young heroes called themselves Robin while working for Batman, and while they all had their own looks, the basics remained the same. While other street heroes opt for darker colors to strike fear into their enemies, the Robins like to stand out in their red, green and yellow costumes.

Given the line of work these teenage heroes have, the color scheme doesn’t make much sense, but it works as a counterweight to the Batman costume and instantly makes any Robin stand out from the crowd. The Robin costume, even with all the changes that have been made to it over the decades, is instantly recognizable around the world.

Usually assassins want to be as discreet as possible. They wear bland clothes in desaturated colors to make sure they don’t stand out, dressing like just about every character in a Jason Bourne movie. But Slade Wilson, better known as Deathstroke the Terminator, isn’t one to do things like everyone else.

Related: 10 DC Heroes With More Costumes Than They Can Count

Instead of blending in, Deathstroke chooses to stand out as much as possible, donning a bright orange and blue costume that makes him instantly recognizable. One thing is clear, no one else in comics can wear so much orange and still be scary.

1 Catwoman is all about style

From her first appearance in a long green dress, to her purple dress, followed by a purple bodysuit, and then her now more common black bodysuit, Catwoman has always had style – even when she wore that fat cat mask for some time. As someone who spends her time clambering up the sides of buildings and swinging around Gotham, either robbing the ultra-rich or battling the many costumed villains lurking in the city, Catwoman always does it with style.

Almost everyone looks good in black, but no one does it quite like Selina Kyle. Catwoman’s style has helped make her as famous as Superman, Batman, and Wonder Woman, and for good reason.

Six things to do this weekend – QNS.com