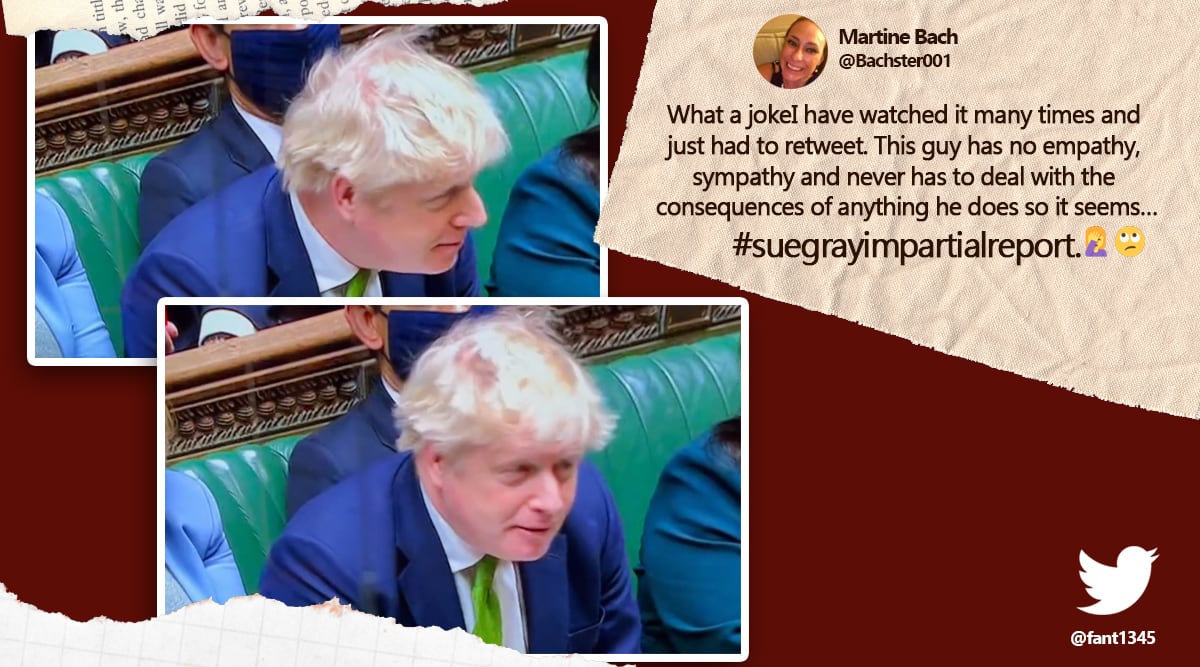 ‘That’s NOT what a leader looks like’: Internet users angered as video of Boris Johnson mocking MP goes viral

During an intense and chaotic session in the British Parliament, Boris Johnson defended himself against the so-called partygate scandal. While Johnson faced brutal grilling during the Prime Minister’s Question (PMQ), a moment when he mocked a fellow MP is widely criticized online.

Amid the scandal that has threatened his leadership and his Tory party, Johnson declined to say whether a prime minister should resign for misleading parliament in the House of Commons on Wednesday.

While many MPs took turns criticizing the Prime Minister, it was his reaction to Ian Blackford, the leader of the SNP in Westminster, that went viral. Blackford spoke up and mocked Johnson saying “Operation Save Big Dog” quickly became “Operation Dog’s Dinner”.

Blackford accused him of “making fun of the British public” and called Johnson’s latest reason “the most pathetic of all – ‘no one told me,'” referring to his statement in which he said that he had not broken any covid-19 rules.

“No one told the Prime Minister he was breaking his own rules, it’s absolutely pathetic. Step down, come on, Prime Minister,” Blackford continued, when Johnson was caught on camera making mocking nods.

Soon, the moment garnered a lot of attention online, where people were not only appalled at Johnson’s action, but also stunned when fellow actor Priti Patel was also seen laughing.

Looking at his watch, and making those mocking nods. Boris Johnson’s behavior during @Ianblackford_MP rebukes him #PartyGate and lying to parliament unacceptable pic.twitter.com/510xYEgVe1

You don’t even understand what a party is, let alone normal human feelings. You lack empathy and awareness. Here you were laughing a few moments before#LF pic.twitter.com/FOLdVKmbMC

Yesterday: “I am sincerely, sincerely sorry, I take full responsibility”.

What a joke, I watched it many times and just had to retweet it. This guy has zero empathy, sympathy and never has to face the consequences of anything he does, so it seems….#suegrayimpartialreport. 🤦‍♀️🙄 https://t.co/lhIWNWb7I2

He can only behave the way he does because he is an extremely confident A-hole who knows he will be fine no matter what. The rest of us are going to hang, he’s making plans for himself. https://t.co/9DfTONr2tE

This is NOT what a leader looks like https://t.co/OK3pBVKYQz

Look 👇 where the contrition has gone now, the tears, the shame… it’s a Shan, a fake and a lying weasel #JohnsonOut #ToriesOut https://t.co/gqRuPvX28i

Yes, yesterday I was playing the card of sincerity/shame and apology, but today the mask is slipping again.

Here is the real @BorisJohnson on show 4 all to see. mocking and arrogant as @Ianblackford_MP reminds him of the +150,000 deaths of #COVID-19[FEMININE[FEMININE.

Let the bodies pile up! https://t.co/z5YgA6QRyh

Boris Johnson is openly mocking all of us in the House of Commons today. He’s not sorry, he’s just sorry he got caught. pic.twitter.com/GcDa8FD2T6

Tories debate whether to trigger a vote of no confidence in Johnson amid public anger over the scandal – a superb reversal of fortune for the politician who just over two years ago led the Conservatives to their biggest election victory in nearly 40 years, Associated press reported.

David Davis, a top Tory and former Brexit secretary, also urged Johnson to quit. “You have sat here too long for all the good you have done. In the name of God, go,” he said, The Guardian reported.

Amid growing calls from outside and inside his party for him to step down following repeated revelations of rule-breaking parties held at his residence and office, he dropped the United Kingdom mask mandate. United.

A comparison of the different types of face mask

Plan B: Face masks should be optional. But they still have uses