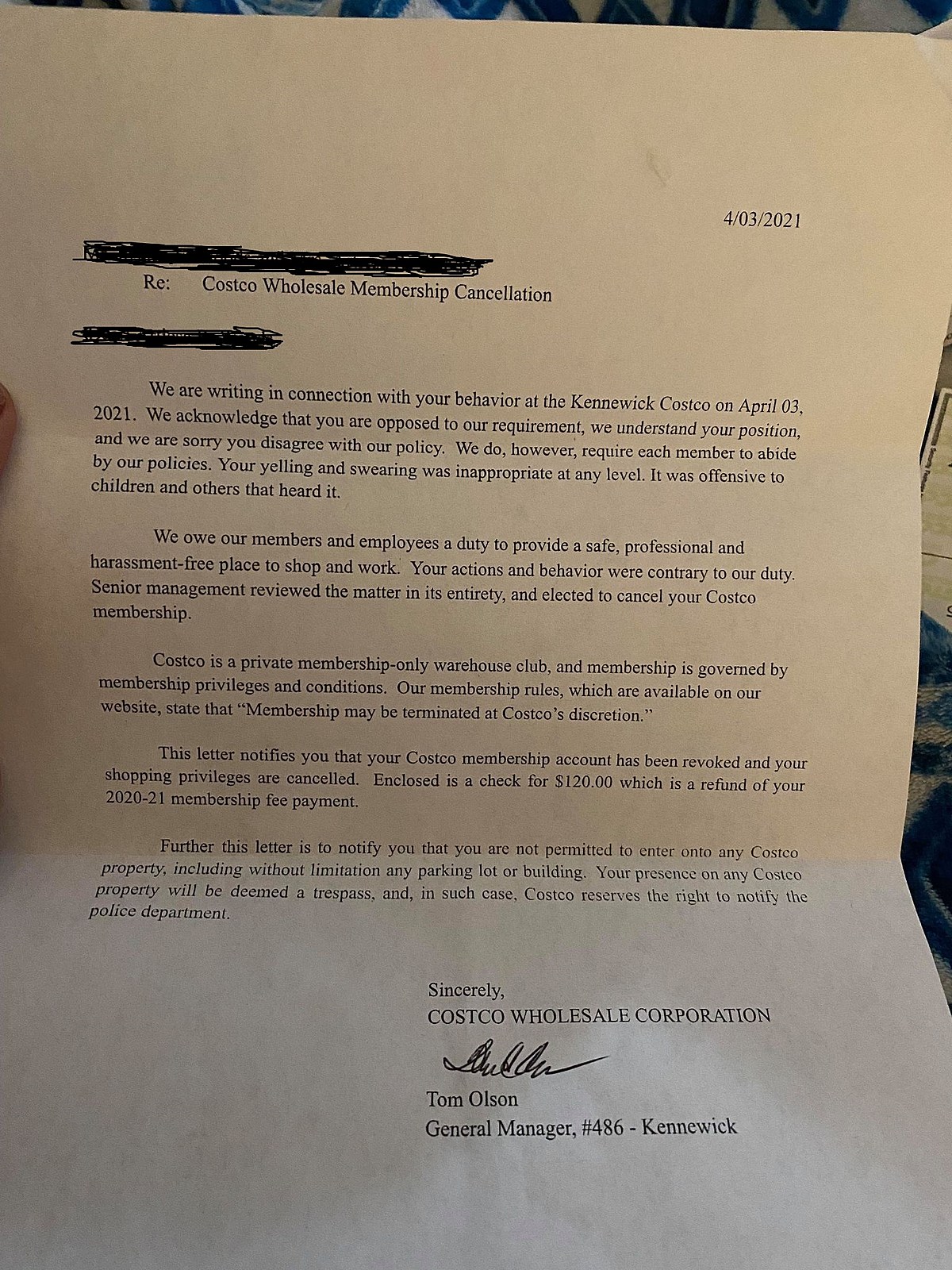 And, apparently, the cashiers-workers are supposed to “report” them.

We reported a woman who received a letter from Costco saying her membership was subject to termination for her breach of the mask policy. She wore one but under her nose. The woman mentioned that no one in the store had told her anything, then two days later received the letter from the general manager and deputy managers. We called Costco Corporate on Monday of this week, but were told we had to submit a media request. They don’t do business over the phone.

Now we have discovered another woman who had a similar situation in early April. This person, who provided us with a photo of their letter, also requested anonymity, but we spoke with them directly.

In her situation, at the very end of March 2021, she walked into the Kennewick store and said she was accosted by another customer-member who stood in front of her and became very belligerent. She did not have a mask and was waiting to speak to a manager because she had been asked to do so. This woman told the accuser and the director that she had a medical exemption letter from her doctor and that she had also previously received a vaccine.

It is not uncommon for people to have certified notes from their doctor regarding masks for medical reasons, including psychological ones.

The other member, she said, used profanity and accused her of being a COVID spreader. The manager told her that she had spoken with the letter etc. didn’t matter. The woman and the other member found themselves in a brief shouting match before the director arrived.

She ended up leaving. She later received this letter (dated April 3) from Costco Management. She also received a check from them for the remainder of her membership, which was terminated. This woman is a veteran suffering from PTSD, and although Costco seemed to be hesitant about suspending her membership when she found out about her vet status and her PTSD, she told them not to worry, she would find out. other places to shop – and she has.

Now we have also learned from another source how Costco is “executing” the mandate. Reportedly, customers who are seen without a mask are spotted by employees, especially in the queues. If alerted by a worker, management retrieves his information based on his membership number, then sends him the letter of cancellation or threat of cancellation. Suddenly, it is up to the employees, as this source says, to “prick” on the members not wearing masks. This source told us that employees are urged not to confront customers if they do not have a mask, but rather to use the methods listed above.

As of this writing, we have yet to hear from Costco. We are not sure if other stores are using it, the only information we have is from the Kennewick site.

CHECK IT OUT: See America’s 100 Most Popular Brands