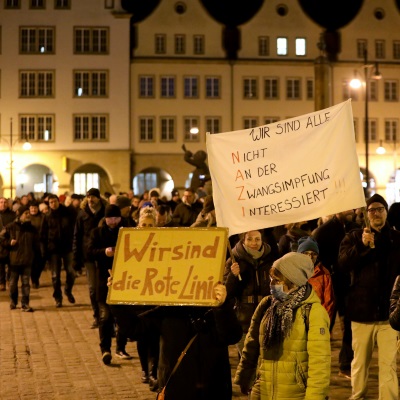 “Santa” detained at unregistered protest, not “arrested” for mask violation

An increase in pandemic restrictions in Germany sparked a protest at a market, where a man dressed as Santa Claus was briefly detained. Online publications falsely claimed he was arrested for not wearing a mask. But police said he was arrested for participating in an unregistered protest.


What evidence supports the use of face masks against the coronavirus?

Multiple evidence supports the use of face masks to limit the spread of the coronavirus.

Laboratory tests, for example, show that masks can partially block exhaled respiratory droplets, which are believed to be the main way the virus spreads. Analyzes of people who have come in contact with people with COVID-19 also found that wearing the mask was associated with a reduced risk of contracting the virus. Numerous studies also document an association between self-reported mask wearing and virus control in a community or the implementation of a mask mandate and a subsequent decline in COVID-19 cases.

While each of these types of studies have their limitations, collectively most experts agree that masks have the potential to reduce transmission of the coronavirus and should be used by members of the public when in close proximity to others. people. Some research also indicates that face masks can protect the wearer as well.

Masks, however, should not be considered foolproof, as no mask is supposed to offer complete protection to the wearer or others. For optimal performance, the Centers for Disease Control and Prevention recommends that people choose well-fitting, multi-layered masks. To learn more, see our SciCheck story, “The Evolving Science of Face Masks and COVID-19”.

A new wave of COVID-19 infections spreading across Europe has become of concern to the World Health Organization. Germany and other countries increased pandemic restrictions to help slow the spread of the disease, which has led to protests across the continent in recent weeks.

An incident during a demonstration on December 13 in Stralsund, Germany, was featured in am item by DJHJ Media, a medium that has been known to spread disinformation. The headline incorrectly stated: “Santa Claus Arrested by German Police for Not Wearing a Mask at Famous German Christmas Markets”.

The article also stated: “Santa Claus, who was dressed in his traditional red and white dresses, put on his Christmas hat and had his face covered with a large fake beard. However, the German officers of the “Polizei” said it was dangerous because Santa Claus was not wearing a mask. The “Santa Claus” was then arrested and dragged through the market. “

This is not what happened, however.

Video of the incident was shared on Twitter with the tweet, “Lol, the German police arrest Santa Claus for not wearing a mask, this is the madness we have achieved. The video has received over 938,000 views on Twitter.

Wearing a mask is currently compulsory indoors and outdoors – wherever social distancing cannot be maintained – by Stralsund due to the high infection rates in the area. Corn the individual in the costume of Santa Claus was not arrested for not wearing a mask. He was briefly detained, not arrested, for potentially breaking a law banning illegal protests, police said.

Stralsund Police posted a December 14 declaration saying the man in the suit was one of 65 protesters voicing “their opinions against current Corona measures and a vaccination requirement” in Stralsund’s old market during an unregistered protest. It’s a criminal offense under the National Assembly Act, also known as Assemblies and Elevators Act.

The police statement revealed that the individual “refused to give his name” and was accompanied by a patrol car to determine his identity.

“After the identity of the man was known, he was released from police measures around 7.15pm and is now on the run again,” he added. declaration noted. “It later emerged that the 47-year-old was suspected of committing crimes against the Assemblies Act in connection with protests criticizing the coronavirus.”

The law, which was enacted in 1953 and has undergone several modifications, stipulates that anyone wishing to hold a public meeting in “the open air or in an elevator” must register with the competent authority at least 48 hours before the meeting. .

Holding a public gathering in the open air or in an elevator without registration is punishable by “imprisonment for up to one year or a fine”. The police can end a meeting that has not been recorded or “if the information in the recording is not met or the conditions are not met.”

The police statement said two similar protests had taken place earlier on the same day and that criminal proceedings had been initiated at those locations.

Editor’s Note: SciCheck’s COVID-19 / Vaccination Project is made possible through a grant from the Robert Wood Johnson Foundation. The foundation has no control over the editorial decisions of FactCheck.org, and the opinions expressed in our articles do not necessarily reflect the views of the foundation. The goal of the project is to increase exposure to accurate information about COVID-19 and vaccines, while reducing the impact of misinformation.

Roscoe, Matthew. “Update: Santa Claus in Germany was NOT arrested for refusing to wear a mask. “EuroWeekly News. Dec. 17, 2021.

World Health Organization. “Statement – Update on COVID-19: Europe and Central Asia again at the epicenter of the pandemic. »November 4, 2021.

Omicron COVID Update: Near-Record COVID Case in NJ; Beginning of the mandate of the Newark masks

Omicron cases rise in Georgia, worrying many ahead of Christmas vacation – WSB-TV Channel 2