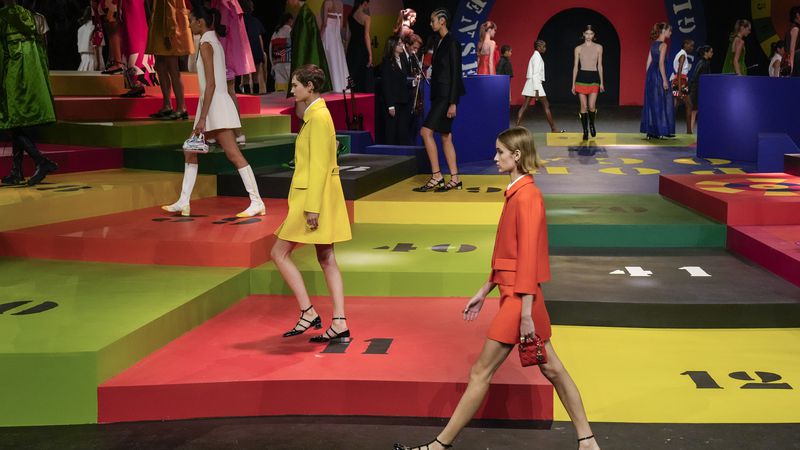 PARIS – Paris Fashion Week is back after a hiatus linked to the coronavirus. The haute couture world has gone mostly digital for a year during the pandemic, but big hitters like Chanel, HermÃ¨s and Louis Vuitton are finally returning to the runway live this season. The essential accessories? The face mask and the health pass, of course.

Dior got Tuesday’s ready-to-wear comeback – with figures such as actress Rosamund Pike and tennis ace Roger Federer – off to a flying start on the first full day of the spring-summer collections 2022. This was the famous fashion house’s first ready-to-wear show since February 2020 – a touching comeback for some.

Here are some highlights, including Saint Laurent:

Designer Maria Grazia Chiuri has dived into the Dior archives to come back with a playful collection that celebrates color and graphic form.

All around the venue – in an annex inside the Tuileries Garden in Paris – were colorful blocks and retro panels that were a clue to the collection’s 1960s aesthetic.

The show was a tribute to former designer Marc Bohan, whose 1961 â€œSlim Lookâ€ collection defined a generation. (Liz Taylor ordered 12 dresses immediately at this iconic show.)

The display evoked a dream world. The models rotated robotically around the set to offbeat music. Elegant square 60s jackets with trendy graphic pockets mixed with sporty jackets and dresses inspired by a tennis skirt. The main letdown to the otherwise tasteful collection was a series of silk boxer pajamas – which made the house feel like it was trying too hard to be young.

BACK TO BUSINESS AS USUAL? NOT ENOUGH

Now that coronavirus travel rules have been relaxed between Europe and the United States, New York fashion editors are back in the City of Lights. It was a touching event for many, who had missed seeing their international friends in the industry.

â€œIt’s nice to see everyone. I’m glad the system is back. I’m happy that brands can get that kind of exposure, â€said Kenneth Richard, editor of The Impression magazine. “It’s a gift what we do.”

Richard, however, expressed his skepticism in the face of such a complete opening up of Paris. Many at the Dior show and others wore no masks even though the seats were extremely cramped. At Milan Fashion Week, social distancing and the wearing of masks were more stringent.

â€œLook at this space, we’re shoulder to shoulder,â€ said Richard, pointing to the four seat sections back to back. â€œIn Milan, everyone was a meter apart.

If a third of the 97 parades of Paris Fashion Week this season – including most of the heritage houses – have opted for a physical presence, two thirds remain digital.

Former French First Lady Carla Bruni and actress Catherine Deneuve looked up in awe as the Eiffel Tower twinkled at the 8 p.m. strike.

The legendary house of Yves Saint Laurent has said it is forgoing the Paris Fashion Week schedule. But on Tuesday, he changed his mind, returning to the first big day of shows. Fortunately, it did – because it could be crowned the best collection of the season so far.

Bursting with sex appeal and glamor, designer Anthony Vaccarello was in a confident mood, stepping out of his normally restrictive short-skirted silhouettes for a daring collection that blended style and provocation.

Notable details included a flash of bright blue gloves over a pale (signature) tuxedo dress. Or a thick gold bangle contrasting with a color-block vermilion suit skirt. The proportions were sometimes oversized, with a loose silk fabric looming over the hems of the dress. The nipples exposed on models with piercings mixed this classicism with a fierce street vibe.

The surreal aquatic helmets, masks and breathing apparatus of the Botter show evoked an underwater dystopia. Or was Rushemy Botter and Lisi Herrebrugh’s show just another blow to the pandemic?

Either way, the creators were in cutting edge form for Spring / Summer in their statement on the ecology and state of the oceans.

A sheer curtain swelled like it was underwater as the models strutted through aquatic themes, including swim caps, scuba looks, a square T-shirt with “CARIBBEAN” on it and a large blue umbrella for a hat. The ironic humor was never far from the inspirations of the design and blue, of course, was the defining color of the show.

The house said more than half of the fabrics on display were created from recycled ocean plastic.

KENNETH IZE IS A Rising Star

Kenneth Ize kicked off the week with a vibrant, colorful display that paid homage to his Nigerian heritage.

There was a lot to prove for the young designer, who was a 2019 LVMH Prize finalist and caught the world’s attention for his first runway show in 2020 because Naomi Campbell walked the runway. Yet he is doing it with panache.

Stepping away from the understated colors of his latest collection, Ize used golden highlights and light patterns for an upbeat take on spring. Sexy silk evening dresses mixed with fun games in contrasting stripes. The sandals on each of the 29 looks in the series gave off a relaxed vibe.

â€œWe produce our fabrics using the ancestral weaving techniques of the Yoruba people in present-day southwest Nigeria,â€ Ize told The Associated Press after the show. “We merge these weaving techniques with what we consider to be our version of modernity, creating a synchronization between historical craftsmanship and modern silhouettes.”

Celebrating the two continents of Europe and Africa (the designer was born in Vienna to Nigerian parents and raised in Austria), his couture-conscious craftsmanship was evident in the golden dresses and diaphanous gold thread, with a swollen fringe of a bag as in a fairy tale or Greek myth.

Ize is one to watch.

By THOMAS ADAMSON, AP Fashion Writer. Thomas Adamson can be followed on Twitter.com/ThomasAdamson_K