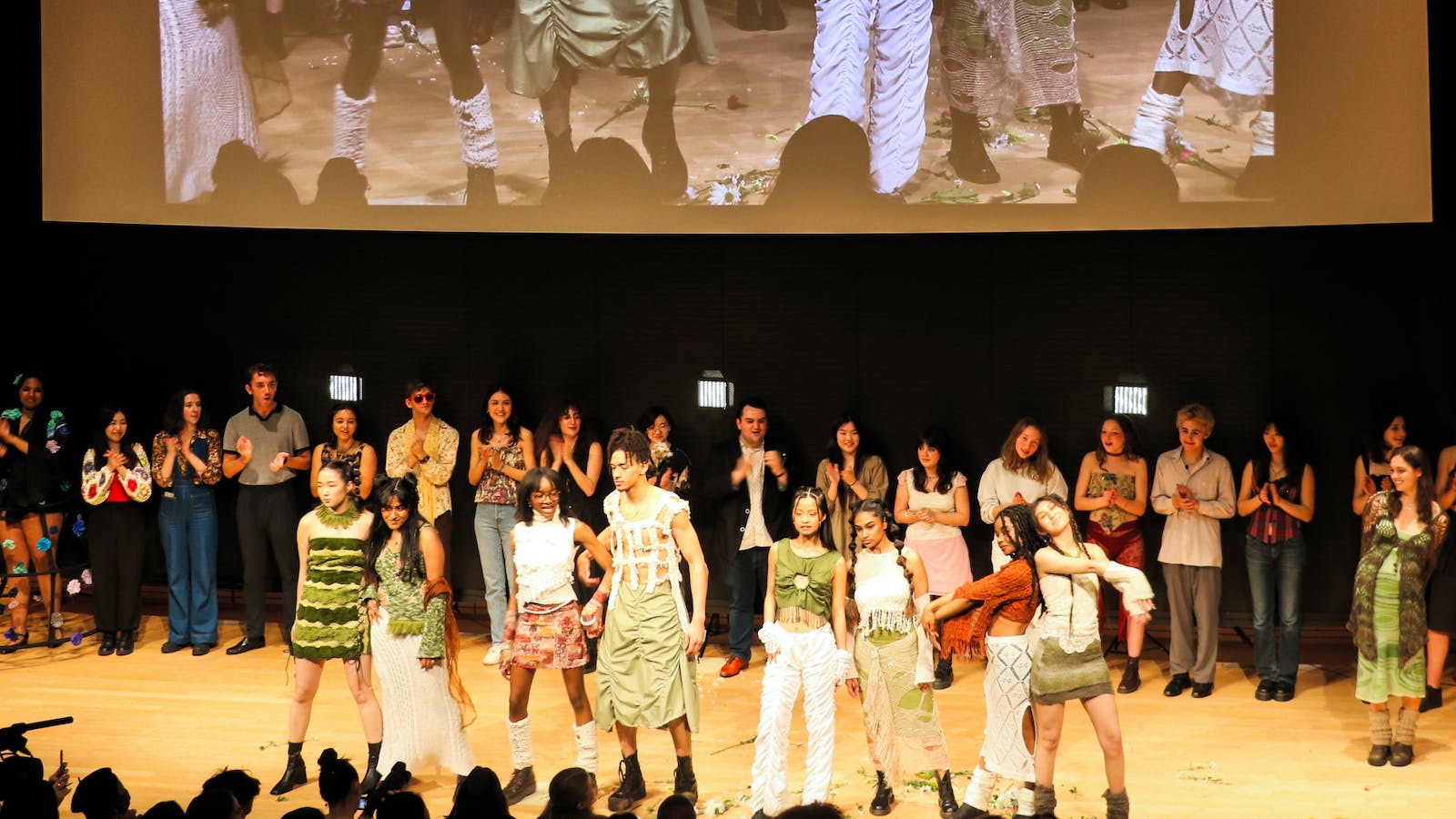 Brown Fashion Week wrapped up Thursday night with [email protected]’s biggest show yet. Every seat in the Martinos Auditorium at the Granoff Center for the Creative Arts, where the event took place, was filled for “Threads and Threats,” the club’s twelfth annual parade. Fishnets, floaty skirts and sexy party dresses were on display. There were beachwear, sheets and headwear made from linked chains. The models even donned a pair of earmuffs and a white yarn ski mask.

The show, which took place in front of a crowd of more than 200 people, opened with some remarks from the three co-chairs of [email protected], Emma Rosenkranz ’23, Sydney Taub ’22 and Celia Heath ’22. Each thanked club members for all the time and energy they had put in throughout the year, talking about how the experience was such a big part of their life at Brown.

The parade, according to Rosenkranz, was the biggest event hosted by the Granoff Center this year. It’s the product of an organization of more than 320 students from the Brown and Rhode Island School of Design, made up of 12 different departments that cover all areas of the fashion industry.

The membership of the club, according to Rosenkranz, is the largest it has ever been. When she first joined in her freshman year, there were only about 100. She described the opportunity to see such growth as “one of the most rewarding experiences “.

Planning for the event began in July and ramped up at the start of the spring semester as the event date approached.

Rosenkranz estimated she’s been putting in about 33 hours a week at [email protected] since the start of February. “It’s basically like a full-time job,” she says. As one of the club’s three presidents, her primary role is to oversee everything from budget requests to lighting design to meeting hair and makeup deadlines.

The design team also put in their fair share of work. Co-design director Sebastian Immonen ’23 described preparations for the show as a year-long process. “Staying on the design team is actually a really tough job,” Immonen said. The 24 designers in the show all had to attend workshops and participate in [email protected]’s winter event, “Intertwine.”

In addition to the designers, [email protected] also relies on all of its teams, including Graphics and Photography, to set up the event.

“I think the biggest challenge has been…bringing this huge club together to produce one resounding event,” Immonen said.

Due to public health restrictions, last year’s parade was held virtually. While the event was largely successful, this year’s in-person experience, according to Heath, was different.

“It’s definitely higher stakes, higher pressure,” she said. “And a lot more work, but it’s all so worth it.”

Rosenkranz agreed, adding that “it was so nice to be in person with the people you talk to literally 20 times a day.”

Although each collection maintained a common theme – one designer focused on blue and gold accents, for example, while others sought a less than fully dressed approach – they incorporated many different styles, ranging from knitwear to grungy black outerwear to sweatshirts and other everyday wear. . One focused on floral patterns, while another opted for elaborately scaffolded skirts.

“There are a lot of interesting collections going in a direction I didn’t expect,” Immonen said. “Like Y2K, and mythical, grassy vibes, and really everything in between.”

Freedom and diversity in design is one of [email protected]’s core values, according to Heath. “I think people sometimes forget that fashion is so much more than what you wear,” she said. “It really is a way of expressing yourself and an outlet for your identity.”

Immonen echoed that sentiment and emphasized that fashion at Brown is all about teamwork.

“Students here, not having received much training in sewing, rely on each other,” he said.

Immonen added that the strength of the design team, and the club as a whole, is really what the show is meant to show. “I want everyone to see this power that we have as a collective.”

Get The Herald delivered to your inbox daily.

“There’s no other place on campus or degree that offers what we do,” Rosenkranz said. She explained that its diversity, free workshops and accessibility to all Brown students is really what makes [email protected] such a vital group on campus.

“It’s a pre-professional organization, and I think it’s a great introduction and educational experience,” she added. “It’s really the focal point for anyone interested in the industry.”

The 12th annual fashion show ended with a final moment for the [email protected] models on stage, marching together to show off the entire year’s collections and then exiting to cheers.

The models were then joined on stage by their designers. Each was presented with flowers by the presidents of [email protected], who were all seated in the front row of the theater. Thanks were extended to the entire club, flowers to some of its senior designers, and thus “Threads and Threats” came to an end.

“I’m really inspired by the hard work each of these designers put into their pieces,” said [email protected] member Pranav Gundrala ’25, who watched the show from the audience. “I was surprised by the personality and the creativity on stage.”home