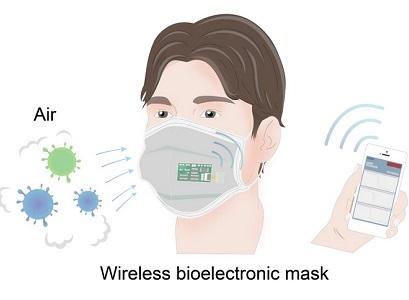 The use of face masks to prevent the spread of airborne disease has long been common practice. A group of scientists from Shanghai Tongji University have now modernized their use by developing face masks that can detect common respiratory viruses. They presented their innovation in a recent issue of Question.

Molecules that contain respiratory viruses often spread via small droplets and aerosols emitted from the mouth of a sick person. Unfortunately, these molecules can remain suspended in the air for a considerable time after being released.

Face masks developed by scientists at Shanghai Tongji University take advantage of this and, within 10 minutes, can alert a wearer’s mobile device to the presence of airborne viruses.

“Previous research has shown that wearing a face mask can reduce the risk of spreading and contracting the disease,” said Yin Fang, a professor at the university and author of the study. “So we wanted to create a mask that could detect the presence of viruses in the air and alert the wearer.”

Fang’s team fitted a sensor with three aptamers, which are artificial molecules capable of detecting surface proteins on a virus. The sensors in the new face masks are able to detect SARS-CoV-2, H5N1 and H1N1.

Detecting airborne viruses is usually difficult, due to the small volume of trace fluid expelled from an infected person’s mouth. Promisingly, the team’s sensors detected viral proteins present in just 0.3 microliters of fluid, nearly 600 times less than the amount of fluid released by coughing or talking.

“Our mask would work very well in poorly ventilated spaces, such as elevators or closed rooms, where the risk of infection is high,” Feng said.

The team plans to change the design of the face masks to make them more sensitive and able to detect viruses faster. They also plan to use their technology in wearable devices that can detect other diseases.