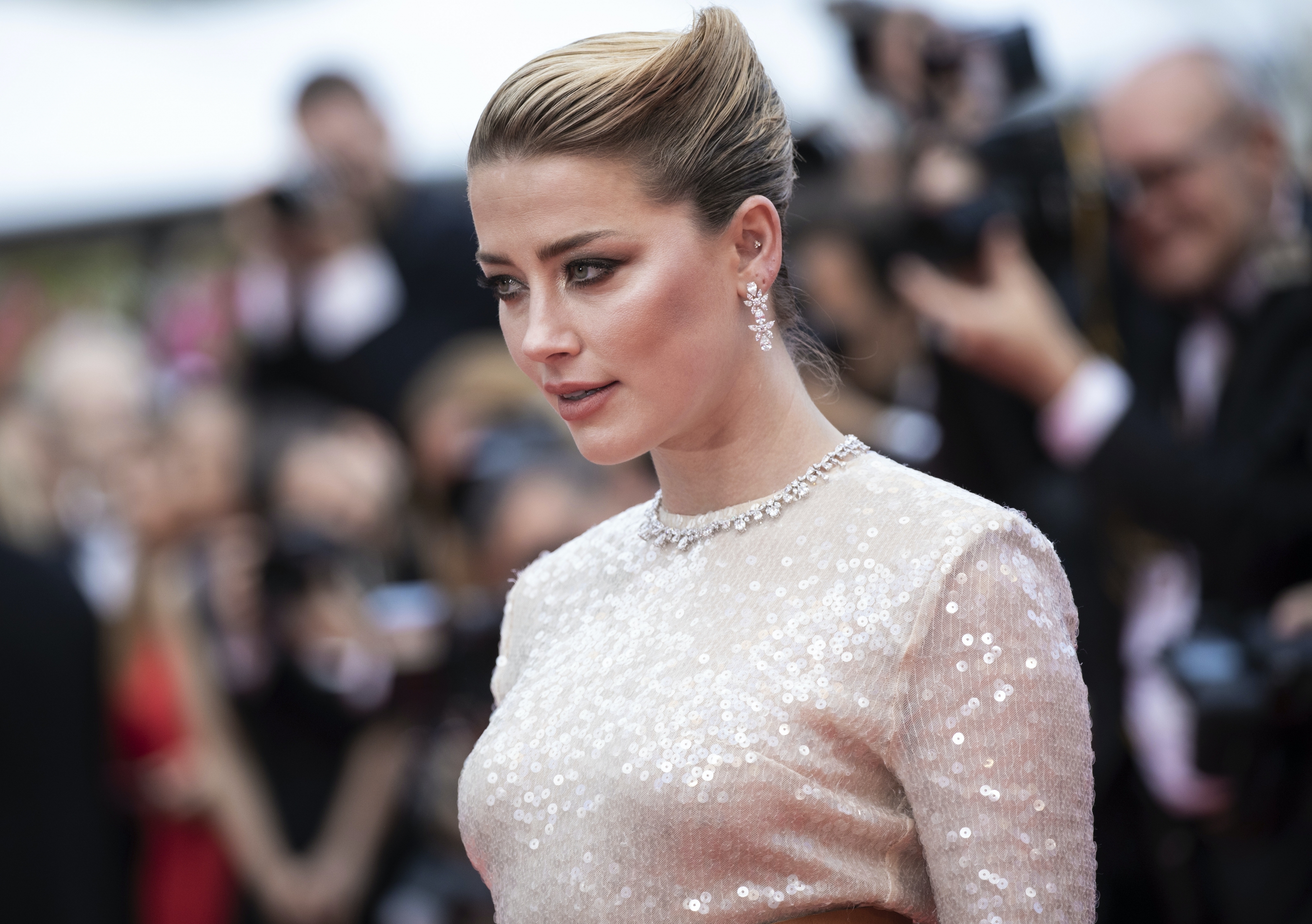 Does Amber Heard really have the most beautiful face in the world? An expert explains why the golden ratio test is wrong

Amber Heard has one of the most beautiful faces in the world, that is according plastic surgeon Julian De Silva. The complaint was recycled for a few years now, and recently resurfaced following Heard’s (widely reported) lawsuit with ex-husband Johnny Depp.

But what is this assertion based on?

Well, according to De Silva, Heard ranks very well on the “golden ratio test”. This test rates the beauty of a person’s face based on how close their facial proportions are to the golden ratio. But is it really a beauty formula?

The Pythagoreans and the Golden Ratio

The Pythagoreans first discovered the golden ratio, also called the “divine proportion”, around 2,400 years ago. It is a mathematical value called “phi”, represented by the Greek symbol φ, and equal to approximately 1.618.

The Pythagoreans were a mystical cult of mathematicians who considered many numbers to have mystical, philosophical, and even ethical significance. They chose the pentagram as their symbol. With its quintuple symmetries, it symbolized health for them.

Pentagrams are mathematically fascinating, not least because they feature the curious ratio φ. In the pentagram shown, the four bold black lines increase in length by φ with each step. So the long horizontal line is φ longer than the length of the bold side.

Similarly, consider six circles of the same size, arranged in two rows of three and nested inside a large circle (as shown). The radius of the large circle is φ times larger than the diameter of the small circles. 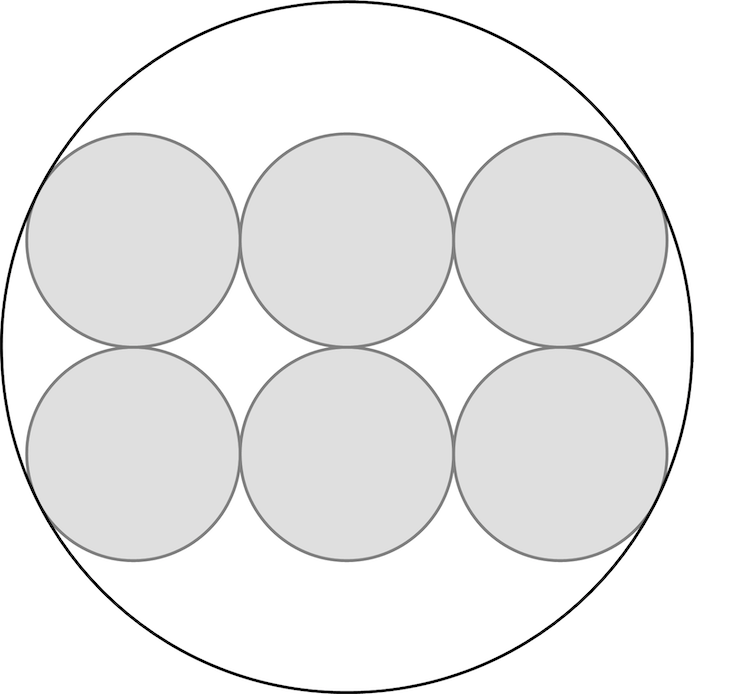 φ is present in this assortment of circles.

Fibonacci numbers and their golden ratio are surprisingly widespread in math. They too appear in naturecreating pretty spirals in some flowers, pine cones, and the swirling arms of some galaxies. 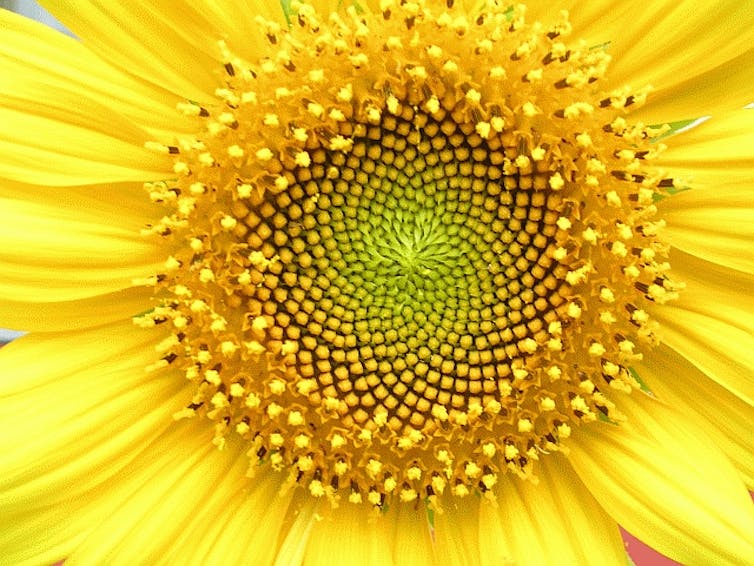 The Fibonacci numbers are found in the whorl of the sunflower (Helianthus). L. Shyamal/Wikimedia

The realm of Plato’s ideals

Influenced by the Pythagoreans and their love of beautiful mathematics, the Greek philosopher Plato (423-347 BC) proposed that the physical world is an imperfect projection of a more beautiful and “real” realm of truth and ideals. After all, no perfect triangles or pentagrams exist in real life.

According to Plato, these truths and ideals can only be seen in the physical world by logical reasoning, or by creating symmetry and order, through which they could shine.

This greatly influenced Western thought, including modern science and its presumption of universal laws of nature – such as Isaac Newton’s laws of motion or Albert Einstein’s equation for special relativity: E = mc2 .

One of the promoters of Plato’s ideas was the Renaissance mathematician Luca Pacioli. In 1509, Pacioli published a trilogy written on the golden ratio, entitled Divina Proportione, with illustrations by Leonardo da Vinci. This highly influential work sparked the first outburst of popular interest in the golden ratio. 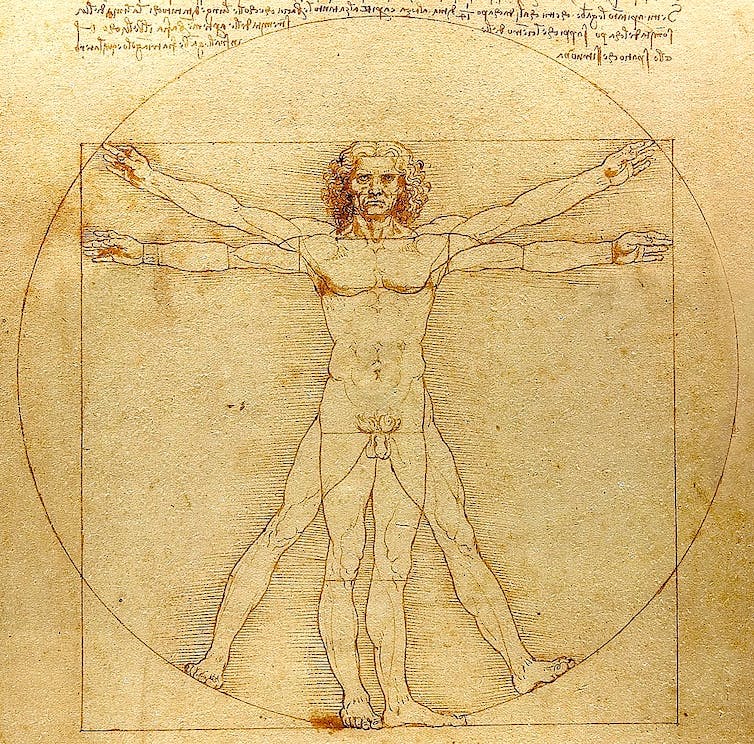 The Vitruvian Man is thought to have been completed around AD 1490, some 1,800 years after Plato’s death. Illustration of Leonardo da Vinci

The myth of the golden ratio in ancient art

Adolph Zeising, in his books published between 1854 and 1884, developed this idea. In his last book, Der Goldne Schnitt, he asserted that all the most beautiful and fundamental proportions relate to the golden ratio, not only in bodies but also in nature, art, music and life. ‘architecture. This led to the popular claim that ancient Greek art and architecture exhibited the golden ratio and were therefore beautiful.

But as Mario Livio describes in his book The Golden Ratio, this has been dispelled as a myth. There is no record of ancient Greeks mentioning the golden ratio outside of mathematics and numerology, and studies show φ is very rarely seen in ancient Greek art and architecture.

Voted the most beautiful building in the world in 2017, the Parthenon in Athens would have φ among its proportions. But careful calculations show that this statement is false.

Yet the myth persisted. Today, the golden ratio is promoted in art, architecture, photography, and plastic surgery for its purported visual beauty.

Among those promoting the golden ratio as an ideal of beauty is cosmetic surgeon Stephen R. Marquardt. In 2002, Marquardt claimed to have discovered that the golden ratio determines beautiful facial proportions. For example, he claims an ideal face would have a mouth φ times larger than the nose.

Marquardt then created a geometric face mask that represents “ideal” facial proportions for the benefit of cosmetic surgeons and orthodontists – in his words“as a paradigm of the ideal final aesthetic result”.

He also claimed that the mask could be used to objectively assess beauty, which led to the golden ratio test. 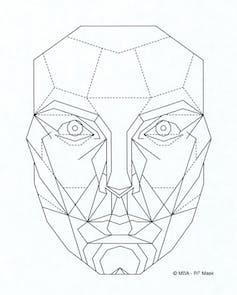 In order to study “attractive” faces, Marquardt measured the facial proportions of movie actors and models. So it was his research on this select group of people that led to his claims and the mask.

But Marquardt’s claims have since been refuted and the golden ratio test debunked.

Studies show that the Marquardt mask does not represent Sub-Saharan Africans or East Asiansnor does it represent South Indians.

In fact, it primarily depicts the facial features of the small population of masculinized women in Northwestern Europe. It’s a look, like a study notes, “seen in the mannequins”.

In fact, evidence suggests that although facial ratios may correlate with perceived facial beauty, these ratios depend on biological and cultural factors. The factors.

A study winners of Miss Universe 2001-2015 illustrated this in a striking way. These winners are considered in many cultures to be very beautiful.

However, unlike the masculinized models in northwestern Europe, the correlation between their facial ratios and the golden ratio of Marquardt’s mask was “statistically significantly invalid”.

So it’s clear: there is no magic number that universally determines beauty.

However, there is currently no evidence to suggest that the golden ratio φ determines facial beauty – or any visual beauty for that matter.

Which of these rectangles do you think is the most beautiful?

This article is republished from The conversation under Creative Commons license. Read it original article.