A three-year-old boy in China who played doctor by giving his six cats Covid-19 tests at home has gone viral on the mainland’s social media.

Trending video of the boy, a Beijing resident surnamed He, shows him with his pet cats, all of whom are wearing masks, as he pretends to administer Covid-19 tests on the felines, Sina News reported.

In the video taken in the living room of his house, he puts on a mask while in front of him we see a tabby cat with a mask on his head lying across a coffee table.

He then tries repeatedly to put a swab in the cat’s mouth, but it clearly has nothing to do with the operation and refuses to open his mouth for the swab.

Despite the cat’s refusal to play along, he shows no trace of annoyance at the boy’s antics. Meanwhile, in the background, another masked cat is queuing up to make his turn difficult.

The father said that after his kindergarten organized Covid-19 tests, the boy had the idea to recreate his experience at home.

“My son is three years old, the cats are five years old and they grew up together. All the cats did well and enjoyed training for the Covid-19 test with my boy,” he said.

At the time of writing, a Weibo news article about the boy and his cats has had over 3 million views, 2,393 comments and 64,000 likes.

“Hahaha the boy and the cats are so cute,” one person commented. 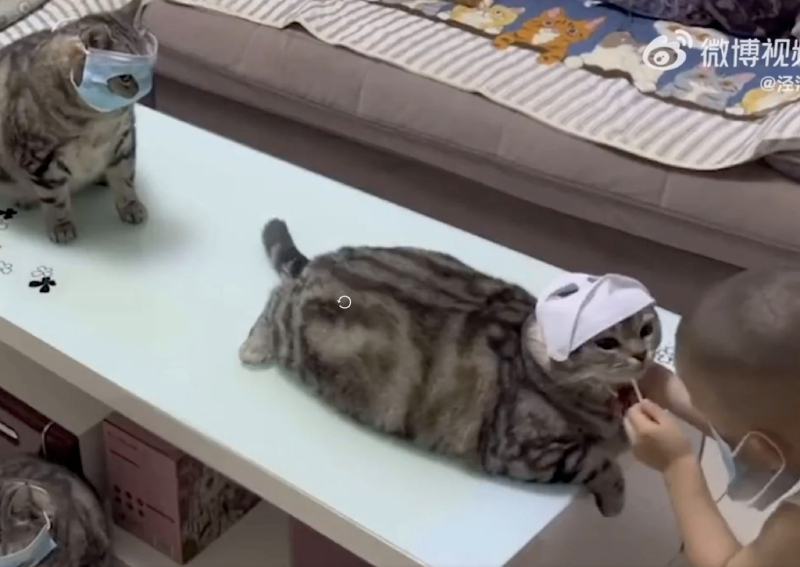 Another asked, “Are you sure that’s cute rather than pathetic?” The little boy can’t have fun with his friends outside and is staying home to mimic Covid-19 tests instead.

Official data released by Chinese authorities on Thursday revealed that there were 5,666 people in China with the coronavirus while 259 new cases were confirmed that day. Most of the new cases came from Sichuan and Guangdong provinces and the Inner Mongolia region.

This article was first published in the South China Morning Post.