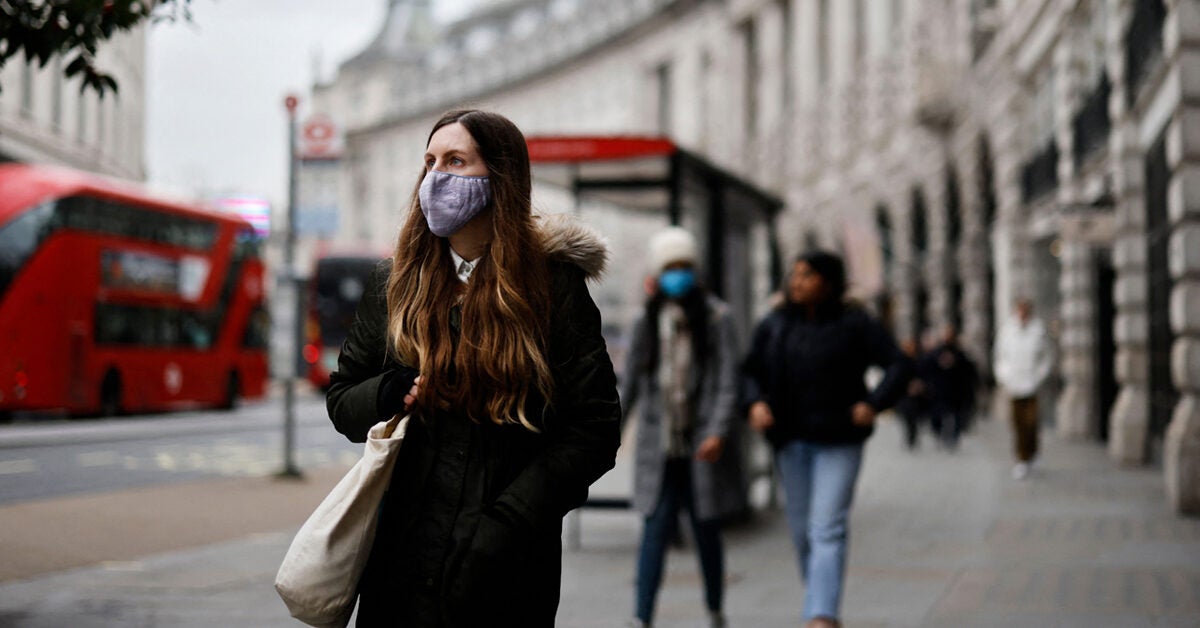 COVID-19: what is the next step after Omicron?

Is Omicron our “exit wave” out of the active phase of the COVID-19 pandemic? After 2 years of living through a global pandemic, many scientists and policymakers are trying to answer what will happen next.

The Omicron variant of SARS-CoV-2 has led to an unprecedented number of infections worldwide, despite appearing in .

Countries with high levels of immunity, whether from vaccines or previous infections, have also seen lower rates of hospitalizations and deaths. This is also the result of Omicron being than its predecessors.

Due to declining rates of hospitalizations and deaths, many hope that we are entering a new stage where we learn to live with the virus.

Some European countries, such as Denmark and the UK, despite high numbers of daily COVID-19 cases, have already eased or lifted many restrictions.

“It’s based on the anticipation that we’re about to enter an endemic phase, but we’re not there yet. As the saying goes, we’ve seen this movie before. There’s a big trend, and we’re seeing it here in the United States as well, for restrictions to be lifted,” said Dr William Schaffnerprofessor of preventive medicine and infectious diseases at Vanderbilt University Medical Center in Nashville, Tennessee.

In addition, many experts still believe that some countries can be rushed in their decisions and warn against being too optimistic.

Here’s what experts predict will happen as Omicron loses steam.

Based on the current data and trajectory, it is still premature to speak of a breakthrough shift to endemicity, experts say.

“It is too early to raise the banner of mission accomplished. We are not there yet. In public health, there is a great tendency to eradicate the control program before the disease is [under] control,” Schaffner said.

If the world becomes complacent, “the virus will continue to spread its way with gusto until it runs out of susceptible people,” he said.

Schaffner said his “cautious optimistic anticipation” is that Omicron will be simmering in the next 6 weeks or so in the United States. if there are no new variants of concern.

He said he hoped the country would be able to talk about the COVID-19 endemic by the end of February or the beginning of March.

“[W]We will have documented across the country a fairly sustained reduction in the proportion of new cases and hospitalizations, as well as deaths, so the CDC will provide guidelines to help us transition into the new normal,” says Schaffner.

“And, of course, across the country, there will be people who just wish, more carefree ways, to return to the old normal,” he added.

Scientists agree that there is no consensus on whether the new coronavirus will remain less deadly or whether the current pandemic cycle will end with Omicron.

“Dr. Fauci has flagged the word endemic. But he’s also much more cautious in his messages, not necessarily indicating that we’re going to transition yet,” said Dr Monica Gandhiinfectious disease specialist at the University of California, San Francisco.

Still, there are several public health threats even when the current wave passes, they say.

One is the inconsistent immunity between different populations and different countries.

Uneven protection, whether due to unequal vaccines or waning immunity from vaccines or infection, could create transmission hotspots around the world.

Meanwhile, the biggest obstacle to planning a roadmap for a post-Omicron world is vaccine inequality, said Katharina D. HauckPhD, Professor of Health Economics and Deputy Director of the Abdul Latif Jameel Institute for Disease and Emergency Analytics in London.

About 3 billion people are not vaccinated by choice or do not have access to vaccines.

“I think there will be a larger discussion coming up about the fact that 3 billion people in this world are unvaccinated,” she told Healthline. “The threat this poses to the emergence of variants, because of the costs in terms of lost lives and the need for non-pharmaceutical mitigation, is [unquantifiable].”

“Many epidemiologists believe that the worst, in terms of hospitalizations and deaths at least, is over. But as some say, including the new [higher daily] numbers, there will be possible bumps in the road,” Hauck said.

She said one of those bumps is the threat of new variants:

“[T]hey are very likely to arise. But I think most epidemiologists think they’ll probably have a less traumatic impact than Omicron just before Christmas. And it is because of the very high level of immunity in [many] country, both [due to] previous vaccinations and infections.

Schaffner agreed and said new variants would emerge as transmission continues largely unabated across much of the world.

The real concern, he said, is whether they will spread widely or be more deadly than previous variants. He stressed that we must be on our guard and have a new eventuality.

“There is always the threat of a new variant appearing on the international scene, which will once again change the equation. Of course, this has happened twice before. We were cautiously optimistic. Then came Delta. Just as we were beginning to control Delta, Omicron arrived.
– Dr. William Schaffner

Hauck noted that new variants often have a “transmission advantage” over previous variants.

“Viruses actually have an interest [to] keep infected and contagious people in the community for as long as possible and able to transmit as efficiently as possible,” she said.

A predominant view in recent pandemic discussions is that endemicity means less dangerous than pandemic stage.

However, the belief that new variants always become less severe is not necessarily true, said Hauck. The Delta variant is a prime example. A better phrase would be “not as dangerous”, said Gandhi.

Once the world is in an endemic phase, the world will be “a much safer place because the virus is under control”, she said.

Schaffner reiterated that while the virus is unlikely to pose a big threat to the majority of the immune population, there will always be vulnerable groups.

“It is still a very dangerous virus for unvaccinated people and also for people who are immunocompromised or very frail, with a number of underlying conditions that predispose them to serious illness. We in public health must continue to urge people to be careful, in order to limit the spread of the virus to those who are most vulnerable or those most at risk of serious illness, ”he told Healthline .

This could prompt some people to take their own precautions and mask up if necessary.

“If there are outbreaks of COVID-19 in a community, I think many people, especially older people, people with underlying conditions and people with compromised immune systems, will again reach for their masks and get engage in social distancing on their own. They will rent the film rather than go to the cinema. So we’ll see a lot more of that kind of behavior,” Schaffner said.

“I think we can’t stress enough how much we’ve learned about masks over the past 2 years. [T]Immunocompromised people should wear these good masks, N95s,” Gandhi said.

The decision for an annual COVID-19 vaccine would be made based on the level of transmission globally and local communities, said Gandhi.

If transmission in a community is high, vaccination can be encouraged periodically, she said.

“It all really depends on what’s going on. It is a bit premature to make these predictions,” she said.

One possibility, Gandhi said, is that Omicron could drive extremely low cases around the world, even in places with low vaccination levels, such as South Africa.

“The question is, does this reduce transmission enough that we have relatively low transmission rates by this time next year? And in this case, we will not vaccinate everyone. In fact, we will only do those who need to be – immunocompromised or older with chronic conditions,” she said.

On the other hand, Gandhi thinks we might need another vaccine that targets the virus as a whole for broader immunity, to use as a booster for mRNA vaccines. A candidate, she says, is Covaxina vaccine developed in India that could protect against multiple variants.

“What if a variant comes out that’s even more mutated through the spike protein? [With a vaccine like Covaxin] you have developed immunity to the whole virus,” she said.

Schaffner, meanwhile, said the world might need booster shots from time to time, like the flu shot.

“We will indeed have to adapt the vaccine that we use, or the booster may have to be modified like we do with our flu vaccine on an annual basis,” he said.

Hauck said policymakers are currently weighing their decisions carefully, trying “to navigate a really difficult trade-off between infection control and the social and economic costs of restrictions.”

Gandhi said lockdowns would be unlikely, but restrictions could be reintroduced periodically if hospitalizations increase or an uptick above “what is expected” is seen in winter. She said that level would be different for many countries.

“In the future, there will be an acceptable number of hospitalizations. I don’t know what that number will be. I think 10 out of 100,000 is possible. If it goes much higher, there will be restrictions and an emergency will be triggered.

Hauck said that going forward, hospital capacity would be a key factor in governments’ lockdown decisions.

“Obviously the main concern for policy makers is the number of deaths, but potentially more important is whether hospital capacity is being breached,” she said. “It’s easy to multiply the number of beds, [but] you cannot increase the number of medical staff so quickly without incurring huge costs for other patients. Thus, at a certain level of infections, it is inevitable to put in place containments.

The best travel beauty for a romantic getaway