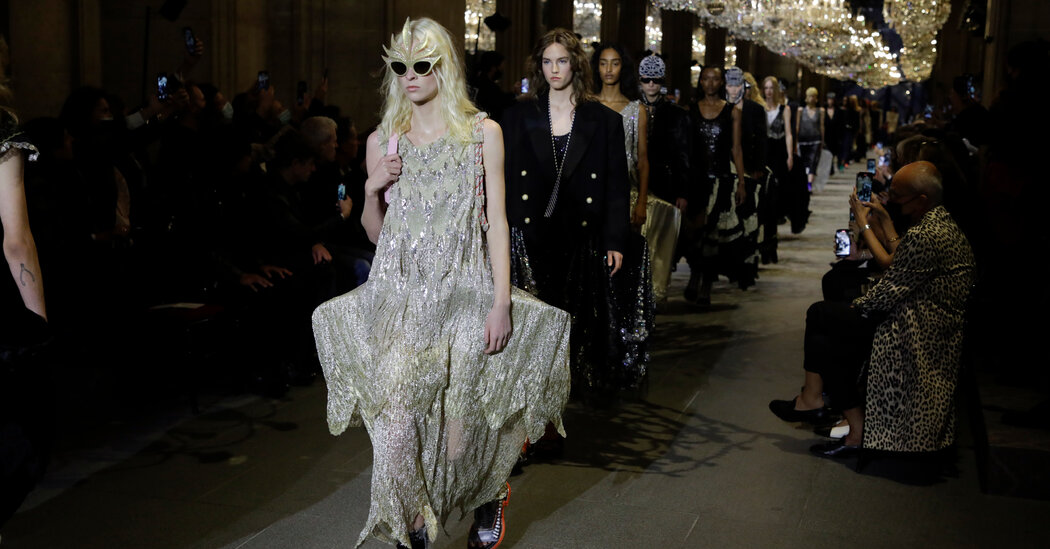 PARIS – Around the same time that Frances Haugen, the Facebook whistleblower, testified before Congress about the controversial actions of her former employer, Twitter CEO Jack Dorsey was front row at the Louis Vuitton parade, stroking his beard with a meditative air. he spoke to Vuitton’s owner Bernard Arnault and watched a parade of richly embroidered, lightly destroyed evening gowns stretched over near-19th-century hip bags. The saddlebags, which looked like the trays the smokers carried, bounced as they walked. The lights of what looked like hundreds of antique crystal chandeliers twinkled above their heads.

This was just before a climate protester stepped onto the runway holding up a sign saying “Overconsumption = Extinction” and managed to make it to the photographers’ pen before being forcibly evicted from the area. She was part of a group of environmental activists gathered outside, with onlookers coming to get a glimpse of Regina King, Phoebe Dynevor, Venus Williams and Emma Chamberlain, along with 23 other names in bold.

The fashion world is thus crashing into the real world. It was a utterly surreal end to a surreal season, full of questions about the meaning of it all after 18 months of some sort of fast fashion. Pleasure to see the imagination in motion again, in person, but also a distrust at the idea of â€‹â€‹stepping back in the wake and losing a hard-won perspective. Masks and no masks, and a lot of nerves.

The best shows have taken new forms, not just on the catwalks but in the way they were designed: Balenciaga’s commentary on celebrity, entertainment and the modern experience via the red carpet and â€œThe Simpsonsâ€; Marni’s flower-power event; Rick Owens’ Mist Cleansing Ritual; Marine Serre’s fictional documentary on upcycling and the community.

Beautiful clothes on a catwalk are no longer enough. It’s too easy to look away. Also: who needs it? Environmental activists are right. If the pandemic has done anything, it has raised the bar for the clothes we live in and the level at which they need to connect.

Miuccia Prada got it, with a Miu Miu collection that merged the dilemma of returning to the office andâ€¦ Britney Spears towards “Baby One More Time” (that would be 1999).

The incredibly shrunken white-collar uniform was Ms. Prada’s subject, and her most mundane basics – khaki pants, gray cardigans, white and blue shirts, navy pleated skirts, trench coats – were her variables, only all of them frayed in. the edges and increasingly tiny. The center did not hold; it was eaten away to expose the whole belly, a big gap opening between the jacket and the pants. The skirts went up to the top of the thighs, exposing the bottoms of the dangling pockets, and dropped below the hips, to show a strip of what lay below.

Crop tops and skin have been a theme of the season, but never have they been used so effectively and slyly to combat the tension around returning to work and the desire to rethink what it means and what it looks like. . (Some tailors in satin pencil skirts and sheath dresses, covered in floral tulle and pearl embroidery and speckled among office equipment, made her look good.)

Meanwhile, Nicolas GhesquiÃ¨re, the artistic director of Vuitton’s women’s clothing, traveled even further through the fields of history, from the 19th century to the 20th century and beyond, in a tour de force of what he called in a release â€œle grand bal de Temps.â€ Technical too, so he made hybrids of shredded rags and Art Deco ornaments; mom jeans and cargo shorts; tails and polka dots from the 1980s; dotted eye masks of rhinestones and giant travel bags.

In the end, Mr. GhesquiÃ¨re got this very rare trendy thing: a standing ovation. Usually, the audience, busy filming on their smartphones, just offers the sound of a clapping hand.

Instead, the music was lyrical, with booming chords crashing all around, and somewhat ominous. In its resounding beauty and examination of eras past, so was the show, which seemed to be a summary of how we have come to it now; the end of something (it’s the 200th anniversary of the founder of the brand). Maybe it was the season. It may have been the last complicated and difficult year.

It may be the start of something new.