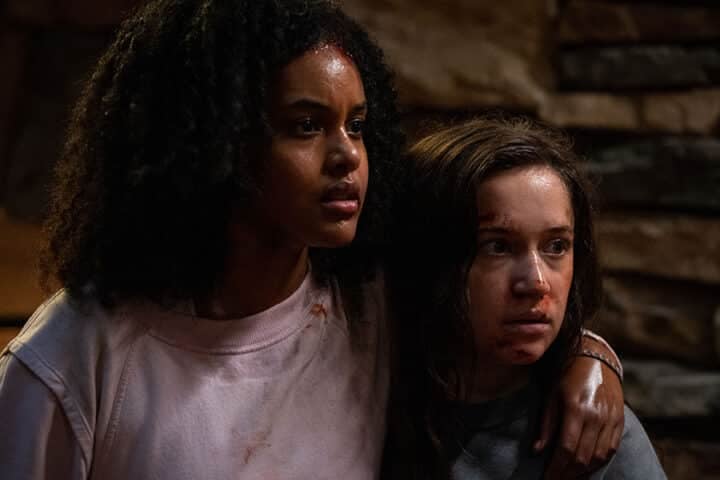 With Wes Craven Screamscreenwriter Kevin Williamson has perfected the art of open cold, and Sick makes a game and a smart attempt to update it for the Covid era. John Hyams’ film, co-written by Williamson and Katelyn Crabb, opens with a young man in the early days of the pandemic as he unsuccessfully tries to get toilet paper from a store that is out of stock. Soon he is the recipient of a series of mysterious, initially playful texts from an unknown source, which become increasingly threatening as he returns home, where the sender emerges from the shadows to dispatch him. without mercy.

Sick then focuses on Miri (Bethlehem Million) and Parker (Gideon Adlon), who drive to the vacant rural mansion owned by Parker’s family in order to quarantine together. Once there, they kill time playing drinking games while watching the news, snapping a photo at every mention of Anthony Fauci’s name. Their hangout is interrupted by Parker’s boyfriend, DJ (Dylan Sprayberry), whose nonchalance about Covid safety protocols irritates the more conscientious Miri. But the most unwelcome intrusion comes when the mysterious killer from the opening sequence appears on the scene, gradually making his presence disturbingly apparent.

The ensuing home invasion beats are fairly routine, but Hyams’ direction gives them a refreshing burst of energy. Perhaps unsurprising for a filmmaker who has proven his bona fides in the genre through two spellbinding gonzo universal soldier sequels and the stripped down survival thriller OnlyHyams brings kinetic heat to Sick‘s slasher traps. Throughout, the film’s characters impressively hold their own when forced to defend their lives, with Hyams capturing every incident of chilling mayhem as if he were shooting a martial arts film.

Throughout, Williamson solidifies Miri and Parker as another in his pantheon of strong female characters, as they intelligently and fiercely assess the unfolding situation. Of course, as the Scream series, the question of who is behind the mask and what drives his murderous game remains the film’s overriding mystery. When the irreverent revelation comes, Sick loads up on what could only be called Covid sploitation, and this initially provocative and urgent twist turns into a cheap punchline given its lack of follow through.

At the end, Sick mostly chooses to tie together the narrative endings almost superficially. The film’s denouement also betrays the fact that Williamson can sometimes seem terribly out of touch when it comes to writing for the Gen-Z market; while he’s known for his acerbic self-awareness, he misses a few opportunities to comment on his characters’ über-privileged, social media-savvy existences. Ultimately, however, Williamson’s collaboration with Hyams still proves to be a largely revitalizing and fruitful endeavor. With Wes Craven gone, the screenwriter has found a director who can apply a new kind of dynamic visual energy to his still-firm grip on the rules of what makes slasher movies truly killer.