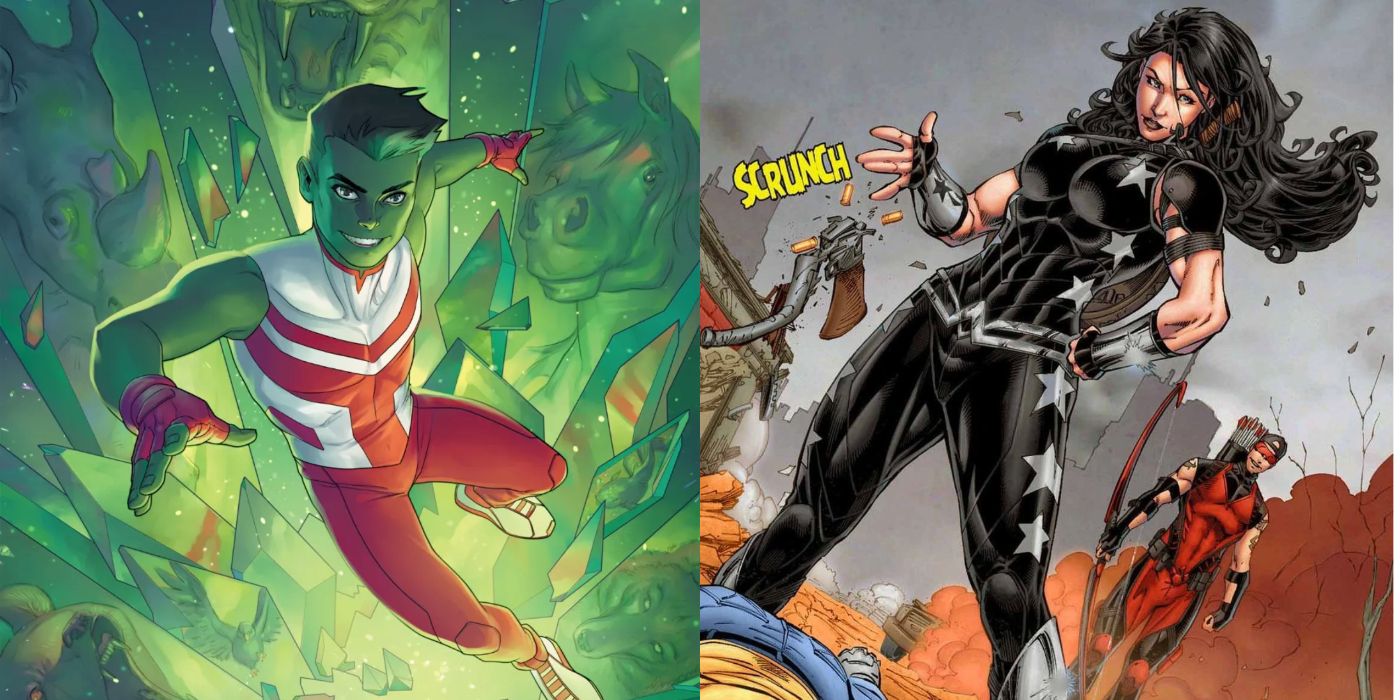 DC Comics set the standards for early Golden Age superhero costumes. Since then, the publisher has carried on its legacy of great costumes. That’s not to say every costume is perfect, of course, and many heroes could use an upgrade. Some hero costumes are good, but they got ones that work much better for them. Getting a new costume would do wonders for them.

Superhero costumes either work great or don’t work at all. Sometimes a design just doesn’t fit a character as well as it could. Other times, a hero’s costume was once cool but could definitely be changed.

The Signal often feels like the forgotten member of the Bat-Family. Duke Thomas was a big part of the New 52 Batman mythos, which didn’t really do the character a favor. It was lost in the post-New 52 DC rework, and a costume upgrade might help that. A big problem with Signal’s costume is that it’s too yellow.

Yellow is a pretty big color in the annals of Bat-Family costumes, but the Signal overdoes it. Lighter coloring works for the character, but yellow is just too much. Overall the design is pretty good, but a few tweaks could make it a classic.

Jai and Irey West have finally found continuity with their mother Linda. The recovery of the West family and Wally taking over the Flash has been cause for joy for many readers. Jai and Irey developed Speed ​​Force powers and were known as Surge and Impulse pre-Breaking point and go on an adventure with their father, each getting costumes.

They started doing the same in the current series of The flash. Irey still wears a modified version of the Impulse suit, but Jai hasn’t worn one yet. Both could use new looks, which would set them apart from before.

8 Wild Dog might stand a chance with a better costume

Wild Dog was a failed attempt by DC to take advantage of the Punisher. The problem is that the character’s costume was a hockey shirt with a goalie mask. It might have seemed like a daunting look, especially since Jason Voorhies made the hockey masks scary, but taken together, the costume just didn’t work at all.

Wild Dog hasn’t made too many appearances lately, but a costume upgrade could help the character a lot. He’s not going to suddenly become a Punisher-level anti-hero, but a new costume might change him from something more than the joke he is now.

Guy Gardner has proven to be a brave Green Lantern, even if he’s not exactly the most enjoyable hero in the world. Gardner has always been the Earth Lanterns’ jock, which is why the jacket made sense to him. It made him look like a guy obsessed with his high school days, still wearing his varsity lettered jacket.

It may have worked when he was a Young Lantern, but Guy has grown a lot as a character. Giving him a new costume might reflect that. The jacket is the thing most people think of when they think of Guy’s costume, but it has to go.

6 Cyborg’s current look can be a bit boring

Cyborg has undergone many changes over the years, especially visually. Her first look was cool in a minimalist way. Future artists took it in many directions, some leaning heavily on the cybernetic look and some not so much. Her current look, seen in night wing and titan academy, is extremely bland and could definitely use an upgrade.

Cyborg is such an easy character to modify. Creators have been doing this for ages. This can be considered a technology upgrade, which it usually is. Cyborg still has the potential to be a very cool character, and his current look just doesn’t do it for him.

The former Teen Titans have all become great heroes, but few have had the brilliance of Tempest. The former Aqualad gained magical abilities that made him a more powerful hero than he ever was. He also got a great suit out of the deal. His return in DC Rebirth Titans book made many fans happy, but her new costume was lackluster.

Going from his first Tempest suit to this one is a definite downgrade. It’s a scale sleeveless number that doesn’t really attract attention at all. Tempest had an amazing costume, and the new one could definitely use a change to live up to that.

4 Arsenal’s look is too trashy to be taken seriously

Roy Harper is one of the best legacy heroes in the DC Universe, but his Arsenal costume is terrible. DC has always treated Harper like a black sheep, so he has a “cool” costume. It never really works that way because it just makes him look like a guy trying too hard to stay young. His Red Arrow costume was awesome; his Arsenal suit hasn’t been good for years.

Even when they remove the backwards baseball cap, which is the worst design choice, it’s still not a great costume. Roy Harper is a great character, and he’s rarely had a costume that describes that. An upgrade for him would be perfect.

Red Hood isn’t known for his decision-making skills, and his new costume proves it. The Red Hood had a great first look, and his costumes played with that for years. His new costume came when he changed his murderous ways, but it’s so bland. It feels like playing with the gray Batman suits of the past, just without a cape and a few weird shoulder pads.

RELATED: 10 DC Comics Characters Who Must Be In Black Adam

Red Hood has looked amazing for years, but his new costume doesn’t feel right. There is nothing special at all. He hasn’t had it very long, but it would be great if he changed to something better soon.

Beast Boy is the king of DC’s animal heroes, but he’s never really had a great costume to match. His first costume worked when he was young, but since then he’s been wearing basically the same thing for years. The red and white coloring is great, and it’s the one thing that ties all of her looks together. His current costume is still red and white, but it’s not great.

It looks like something an athlete would wear, which is fine for an athlete, but not for a superhero. Beast Boy is an iconic hero, like most members of the New Teen Titans, so he deserves a better costume upgrade to match his status.

Donna Troy is one of DC’s most convoluted characters, but she’s always looked great. From her child version of the Wonder Woman costume, to the one made famous during her time in the New Teen Titans, to the Troia look, to the starry black costume, Donna has been a fashion plate for the DC Multiverse. Unfortunately, her current costume doesn’t really stand up to those earlier looks.

Donna Troy’s current costume combines several design motifs from her past costumes, but it’s not the sum of its parts. Donna is always on the verge of becoming famous, and putting her in costumes like this does her a disservice. She definitely needs a change.

NEXT: The 10 Most Generic DC Villain Names

HBO finally unveils the first images of the upcoming adaptation